Fall is a superb time of year to enjoy Red-tailed Hawks. By early-mid October, the first of many northern breeders descend upon southern Ontario. These northern birds are richly colored throughout and generally have heavy-duty blackish belly bands (some examples showcasing a near-solid “vest”).The entire head and nape is typically “washed” with rich auburn tones throughout. They’re cracking birds and quite distinct from the light, blondish summertime ‘tail of southern and south-central Ontario. They were named by W. E. Clyde Todd (1950): “Northern” Red-tailed Hawks, subspecies: abieticola, meaning “dweller of the fir.” 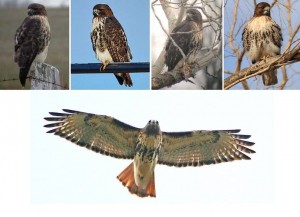 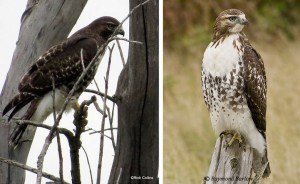 Figure 2: Juvenile Red-tails are often difficult to confidently place to subspecies level, but Rick Collins of Ottawa, Ontario photographed one just E of Ottawa that is on one end of the spectrum; the safe and identifiable one. A consistent identifier with these northern juveniles is that their plumage is much darker throughout, esp throughout the head. Note this comparative picture of Rick’s bird (at left) with a fairly typical example of an Eastern (borealis) juvenile (at right). Also, many examples showcase striking belly bands, sometimes forming a fused “vest.”

For those who have yet to see a dead ringer abieticola Red-tailed, I hope you see your first this fall and I’d love to hear all about your encounter 🙂 For more Identification notes and Natural History information, please visit: https://northernredtails.wordpress.com/

Lastly, for eBird users, abieticola Red-tails can be selected as an option when entering your data: http://ebird.org/content/canada/news/identifying-northern-red-tailed-hawks/.