Drab first-year Baltimore Orioles are a fascinating, and daunting, study. In their 1998 paper detailing female Bullock’s vs. female Baltimore Orioles in the journal, Birding, Cin-Ty Lee and Andrew Birch discuss the following: “Many Baltimores seen in winter or late fall have grayish bellies and are exceedingly pale overall in coloration. These birds superficially resemble Bullock’s. Our examinations of female Baltimore specimens collected in Mexico in December and January revealed that such individuals can become exceedingly pale. Many specimens, especially those collected in Mexico, so closely resemble Bullock’s that at first we believed they were mislabeled.”

The white median (upper) and greater (lower) coverts (wing bars) are of note. With Bullock’s the upper edge of the median wing bar is consistently serrated with black “teeth.” The median wing bar on Baltimore typically has a squared-off, not serrated, look lending to a straight-edged appearance. However, there is overlap to this feature, and some HY female Baltimore Orioles show a serrated leading edge to the median covert. In his review of Lee and Birch’s new field mark, Jaramillo (1999) reviewed and measured this feature on 19 Baltimore and 54 Bullock’s Orioles. He categorized the tooth-mark serration to the median covert into four types. Overlap in this feature occurred most prominently among Type 2 coverts, which show a small, pointed black spur along the top edge of the covert. A total of 36.8 % of the Baltimore and 38.9 % of Bullock’s in his sample showed this feature. There was a small degree of overlap with the large, black tooth serration (the “classic” examples most typically shown on Bullock’s in field guides) associated with Type 3. A total of 15.8 % Baltimore showed a Type 3 pattern with Bullock’s totalling 55.6 %. In their rebuttal, Lee & Birch (2001) stated that the field-identifiable aspect of the serrated edge lies in its asymmetric quality. They noted the combination of point length (“tooth” serration) and taper; the distance that the white tip extends or tapers up to the anterior part of the feather.

Another feature of note w.  Bullock’s is the blending of the median and greater covert bar as of result of the white feather edges extending far up the leading edge of the feathers, producing thin veneers of white (Lee & Birch 1998). The result of this leads to a reduced delineation between the two wings bars and a weak greater covert bar which blends into the area between the two white covert bars. With Baltimore, the effect is two bold, thick white wing bars with the greater covert bar ending more abruptly and having less blending of white extending up the leading edge of the feathers. When that appearance is noted, as is seen on the (undisclosed location) bird, the bird falls out of the Bullock’s camp and into Baltimore or Baltimore x Bullock’s camp.

The Pakenham Bullock’s has a high contrast face with a light supercilium contrasting with slightly darker crown and a thin, dark trans-ocular line. The (undisclosed location) bird (HY Baltimore) has a low contrast face, although it does appear to have some fascinating characters such as darkish smudge to the loral area and a noticeable amount of lemony tones to the throat and upper breast. With these field-characters in mind, it is possible to me at this point that this bird could have hailed from the Great Plains where the two reportedly hybridize in a narrow belt in the western region of the ‘Plains (Rising 1970).

Photo: Pakenham Bullock’s Oriole (BUOR).  Many thanks to Tom Devesceri for allowing me to showcase this rather impressive shot of this skulker. 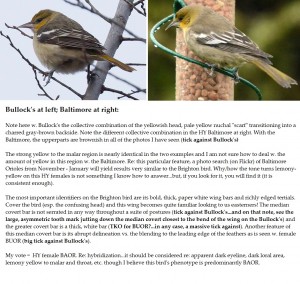 Photo: ID comments above. See below for more samples of the (undisclosed location) Baltimore… 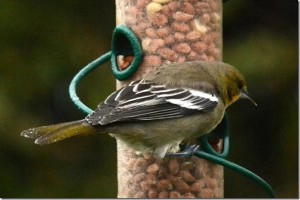 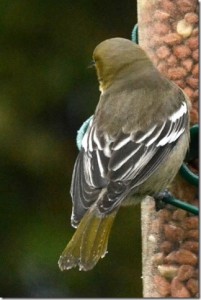 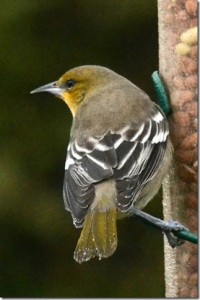 Thank you to an anonymous observer, Tom Devesceri and Michelle Martin for the use of their photos and thank you for stopping by to have a read!

In the middle of a very relaxing n cozy break from hardcore birding, I received a text from a birder: “an oriole at a feeder near where you live; I can pick you up in the morning on my way to see the bird.” I read the text, frowned and thought “absolutely not; I’m on a break…no more, no more…I need rest.” The following morning I went out for a nice morning run. When I arrived home I started to flirt with the idea of ducking out to see the bird. Comfy couch + warm fire + reading + fam. time or “Special Assignment”..? Hmmmm. In the end, somehow, I couldn’t resist: special assignment it was. No rest for the wicked, as they say!

At approximately 1300 h, the oriole visited the feeder for about 5 minutes. Lorraine Elworthy and I were able to take many pics of the bird. I wanted to approach this problematic ID this way: call the ID of the bird out while in the field and then carefully review the photos in a quiet study area afterwards to see if I was correct. The feedback one receives while observing a moving target when one is filled to the brim with adrenaline vs. carefully and methodically working on an ID from photos is entirely different! Immediately, the bird stood out as a Baltimore, not a Bullock’s. It was bright orangey-yellow where it happened to be well-coloured; had two bold paper-white wing bars atop a jet black wing (high contrast); and a “plain” face, lacking the subtle “cap”, light eyebrow and a dark trans-ocular line commonly seen on similar aged/sexed Bullock’s. It was only upon reviewing the photos did I begin to doubt my ID ever-so-slightly (which always means…just enough to cause trouble!). Quietly, I went back and forth but settled on Baltimore. I took a short break, then approached the ID one last time: Baltimore. However, all this said, it is difficult to eliminate the possibility that this specimen is displaying some level of introgression between Baltimore x Bullock’s  (comment added after further review of pertinent material and discussion with blackbird authorities. Added on 14 January 2016). 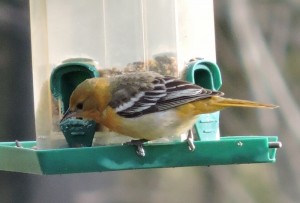 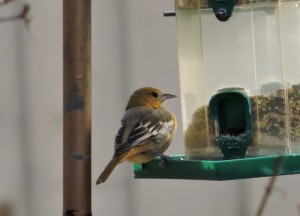 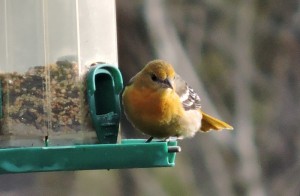 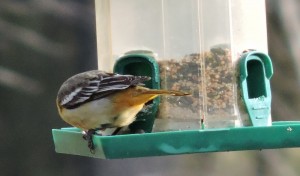