4 June 2015 – Today, along the N shore of Crow Lake in Central Frontenac, I observed a female Pine Warbler foraging along a rocky slope, collecting caterpillars to feed to its young.

Female Pine Warblers are a challenge to ID as they’re often quite drab and grayish overall, like this one. Some ID pointers, from bill-to-tail: 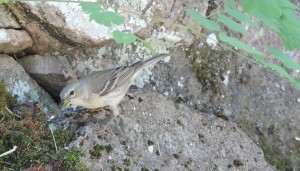