On the X-Axis (horizontal), the date appears; on the Y-Axis (vertical) total number of birds (individuals) reported from all checklists within the study area. 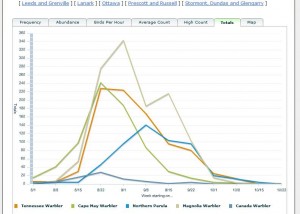 More to come re: illustrating migration timing using this function.

May the birds be with you!