The first migrant Baird’s Sandpipers usually appear in southern Ontario during the last few days of July / early August. Here are a few comments on what to look for with Baird’s (far from a definitive list).

The pics below were taken on 17 August 2014 in Ottawa at Shirley’s Bay:

Behavior: A relatively dainty forager, less likely to aggressively probe the mud, preferring to lightly pick away at substrate. 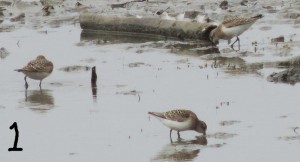 Figure 1: Note here that the Baird’s, which is larger than the adjacent Semipalmated Sandpipers, appears similar-sized, even smaller in comparison, from this angle. However, its broad back, oval GISS, evenly horizontal feeding posture, and crisscrossed primaries warrant further investigating.

Figure 2: From this angle, compared to the Semipalmated Sandpiper at right, note: the larger size overall, longer and thinner bill, and long primaries which are held at a crisscross (open scissor) orientation.

Figure 3: At this angle, the long, lean build with an elegant, attenuated rear is quite apparent with Baird’s (center) as is its larger size compared to the adjacent Semipalmated Sandpipers.