This web article covers some of the less-discussed and more subtle field marks to keep an eye out for when you encounter a Bay-breasted/Blackpoll in the field this fall.

HEAD: Bay-breasted average less-contrastive overall with a less conspicuous eyeline as is seen with Blackpoll. With Blackpoll, the eyeline sets off a light supercilium (eyebrow). The throat on first fall Bay-breasted can be off-white and slightly buffy; with Blackpoll, the throat is usually yellowish. The bill on Bay-breasted averages slighter more heavier-set than Blackpoll. From its base to halfway along the lower mandible shines a beautiful bluish-gray in good light. With Blackpoll, the bill is slightly thinner, with the base of the lower mandible averaging somewhat more dusky-yellow, fading to dark by the tip. In-the-field GISS note: the forehead on Bay-breasted is slightly steeper than on Blackpoll, and the neck, marginally huskier, imparting a bull-headed look and light “peak” above the eye in some postures. Kenn Kaufman (1990) illustrates this subtlety very nicely in his Advanced Birding guide.

UPPERPARTS: Both Bay-breasted and Blackpoll showcase greenish upperparts overlain by dark streaks. The upperparts are usually deep olive green in Blackpoll, and typically lime-green with Bay-breasted; regarding the upperparts to a Bay-breasted, these tones are particularly bright in the region of the nape. The intensity of streaking is age-related, with first fall females showcasing the lightest streaking, and adult males showcasing the densest streaking (this is most true with regards to fall Blackpolls). On some Bay-breasted in particular, note the bluish-gray colouration to the lesser coverts (i.e. the shoulder) and also to the lower rump, and basal portion of the tail feathers. This colouration tends to bleed into the upper side of the tail feathers, especially the outer ones. The traits mentioned above show well on a foraging bird with its tail cocked upward. The wing bars on Bay-breasted average broader and slightly bolder in contrast than on Blackpoll. Both species showcase conspicuous white edging to the tertials but average subtle differences to the edging to their primaries and secondaries. Look for a slightly greenish-blue cast in Bay-breasted and a somewhat greenish-yellow cast in Blackpoll.

Figure 1: Fall Blackpoll (left) and Bay-breasted (right), a comparative study photo to use to follow along with the above analysis. Many thanks to Violet Verhoog, Bill McDonald, and Ronnie Dentremont for allowing me to showcase their photos. 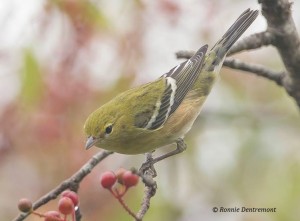 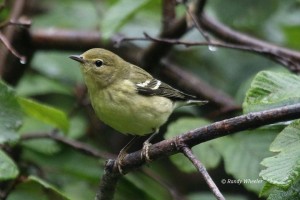 Figure 4: First fall Bay-breasted (left) and Blackpoll (right); the drabbest of the drab re: “Baypolls. Note the very limited “bay” tone to the flanks in this particular Bay-breasted; what is seen is a light dusky-buff blush. With the Blackpoll, note the diffuse, olive streaks to the chest and sides. On this particular Blackpoll, the legs are black, and only the soles of the feet are yellow, as is typical of first fall birds. Regarding underpart colouration, a light, buffy base colour to the underparts is observed with this Bay-breasted. On the Blackpoll, a yellowish tinge to the throat and chest, followed by a light, dusky-yellow colouration throughout the underside, is seen.

Many thanks to Violet Verhoog, Bill McDonald, Ronnie d’Entremont,  Randy Wheeler, and Christine Baird for the use of their superb photos. Their photos significantly enhanced the educational value of this web article.