Did you know that Purple Finch sing a “vireo song?” This melodic, note-pause-note-pause rendition is most often heard during spring/fall migration. From Bent’s Life Histories; the ‘vireo song’ is described by Aretas A. Saunders. “There are three distinct ways of singing, more or less separated by the seasons of the year. The least common song is the ‘vireo song,’ which comes very early in the spring, or rarely in late fall or other seasons. “The ‘vireo song’ is usually to be heard in early March, or in late October or November. This song is made up of phrases of two to five notes each, and these phrases are alternated, with short pauses between them, in much the same manner as red-eyed and yellow-throated vireos. The song is less variable than any of the vireos, however, generally consisting of three different phrases only.” I heard this song yesterday (11 April) while hiking along a nature trail in the west end of Ottawa. Below is a short video that I took: 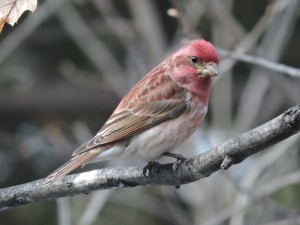