By the third week of April, it is possible that both migrant Western (palmarum) and migrant Yellow (hypochrysea)  Palm Warblers may be encountered throughout eastern Ontario. The ‘situation’ here in Ottawa is unique in that we host a breeding population of Yellow (hypochrysea) birds at Mer Bleue and Alfred Bog. I believe these easterners represent this particular subspecies’ westernmost residence in Ontario, but I am not certain, and I’m too busy at the moment to scrounge around for material! 😉 In any case, what this may mean is that eastern Ontario birders, esp. those in the Ottawa area, may at some point come face-to-face with a putative Western/Yellow intergrade that is not safely assignable to either subspecies. In the east, the genetic delineation between subspecies groups is not often the case; more often than not, one particular subspecies grades into the other throughout a geographical area of introgression and it is from this subspecific ‘grey area’ that slightly confusing individuals sprout.

When looking to identify a Palm Warbler to subspecies (often they prod around out in the open, availing requisite prolonged views) keep a few things in mind. 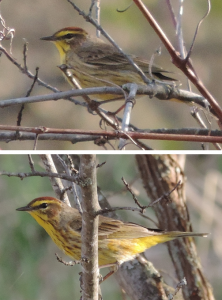 Figure 1: An eastern-like Western Palm Warbler. This bird shape-shifted in and out of designated subspecies camps (well, it appeared to creep close to the Eastern camp when the light hit it ) late in the afternoon at the Richmond Sewage Lagoons on 3 May 2015. Note here how, when shadowed, the light yellow suffusion to the underside is less apparent (top) and quite evident (bottom) when the sun casts its warm glow. 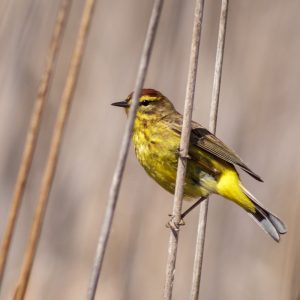 Thank you to Don Wigle for allowing me to showcase his beautiful photo of an Eastern Palm.