Peak Blue-headed Vireo migration is just around the corner here in eastern Ontario. Typically this species pulses through in large numbers from mid-September through to early October, with birds known to linger in favoured migrant haunts well into October. Last fall, there was a significant movement in Ottawa which occurred on, I believe, September 15th (can’t find these particular notes at the moment) where 5-6 Blue-headed Vireos were reported by multiple observers from numerous birding hotspots throughout the city. By late September, Blue-headed Vireos are pulsing through at their peak migration through southern Ontario. Blue-headed’s have great character and are often quite vocal during migration. Perhaps it’s the first year birds which are the most “chatty,” tending to merge their rambling song bouts with squeaks and chatters. One call (I’ve often) heard during fall migration is the “teeweh” call. It is an adorable call, and it’s almost as if the sound was produced by a pet’s squeak toy of some kind. If a Blue-headed is producing this sound, and this sound alone, from a canopy, it’s potentially a real head-scratcher if a birder is not familiar with it. Here is a sample of the call: http://www.xeno-canto.org/87745 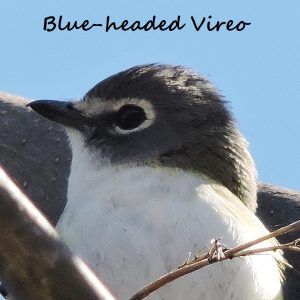