I watched this flock of “Richardson’s” (hutchinsii) Cackling Geese from a distance and managed a pic as they flew overhead. At a distance, their small bodies, rapid wing beats and narrow “hands” were apparent. They were largely silent with the occasional sharp yelp here and there.

In Figure 2 below is a picture representative of my naked eye view as they flew overhead. Note how the head nearly disappears at a distance; this species lacks the large, wedge-headed GISS of Canada Geese altogether, instead appearing pin-headed at a distance. I have found that their pin-headed look provides a nice gut response when investigating a distant flock. 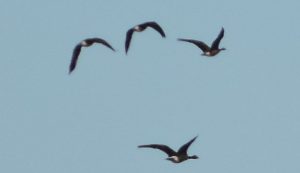 Figure 3: Here’s another Cackling Goose from that same day. The pin head, deep belly and sharp “hand” are traits that shine through at a distance (see bird at top right). Others are Canada’s: