In 2004 Cackling Geese were formally split from Canada Geese, and since then, birders have been keeping an eye out for them. This ID challenge is very much like a birders version of “Where’s Waldo?”

An excellent overview of this split was provided by OMNR waterfowl expert, Ken Abraham, in the winter of 2005. Here’s the link: http://www.ofo.ca/site/page/view/articles.cacklinggoose. I will attempt to make this discussion as clear, digestible, and casual as possible, but if anything is unclear, please email me at eontbird@gmail.com and I would be happy to go over material. Below I provide an identification overview of “Richardson’s” (hutchinsii) Cackling Geese, Myth Busting, and Quiz photos.

Figure 2: More prototypical hutchinsii Cackling Geese, with three interior Canada Geese at back. Once small-bodied white-cheeked geese are located in a flock of geese, Cackling Goose ID  begins from the head down. A primary identifier is the head and bill morphology; you can ID even the larger male hutchinsii with confidence once you dial the head and bill morphology into your search image. Andrew Haydon Park — 1 October 2013.

Figure 3: A flock of 25 hutchinsii Cackling Geese. Note how they “bundle” up and form a sub-flock within a flock; this is often the case and often by looking for sub-groups, one can get on geese of special interest within a flock of Canada’s. Almonte Sewage Lagoons — 10 October 2014.

Myth: if it’s not approaching Mallard-size, it’s not a Cackling

Figure 4: An example of variation in size and structure in eastern hutchinsii Cackling Geese. I find that I observe the large, “blocky” head and “Roman’s Nose” bill on presumed males more than I do with petite, presumed females. I noted these two as a pair: they swam together for several hours. Almonte Sewage Lagoons — 10 October 2014. 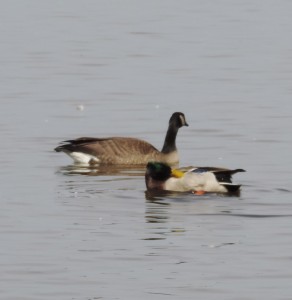 Figure 5: A juvenile interior Canada Goose with a male Mallard. This photo provides an example of the smaller size of these more northern Canada Geese.To note, juveniles are, on average, 90% the size of adults (Ken Abraham, pers. comm. October 2013) so this particular specimen is on the small end of the spectrum for a typical interior Canada. Andrew Haydon Park — 1 October 2013.

Figure 6: A hutchinsii Cackling Goose (at left) with a diminutive interior Canada Goose essentially overlapping in mass. Both are close to shore and fully alert (outstretched necks, etc). Note the difference between the two with regards to neck length and girth; bill morphology; pale feather edgings throughout the upperparts (emarginations); breast coloration; head size and shape. Andrew Haydon Park — 1 October 2013.

Myth: a white necklace means some other subspecies 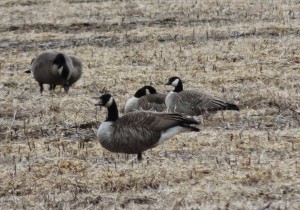 Figure 7:  A necklaced cackler. At the time, I thought I may have come across some sort of western subspecies. I sent Ken Abraham (OMNR Waterfowl expert) an email and he responded: “In a sample of fall migrant B. hutchinsii from Thunder Bay that I examined in 2005-2006, 23 of 82 had good white neck rings. Banding data have linked those birds to Baffin Island. I don’t know what the percentages are from other areas within the Cackling goose breeding range, but I suspect they are not uncommon. Occasionally one will have the very strong markings that your bird shows.” Carp River Floodplain — 16 November 2013.

Cackling Geese with gently sloped foreheads and rounded, dome-like crowns can be seen throughout a season of goose-watching here in eastern Ontario. I believe these geese hail from mid-western Arctic populations (what western birders term “parvipes”). From a strictly eastern Ontario perspective, I do not subscribe to classifying these birds as a separate subspecies; to me, it appears quite possible that there’s a gradual cline towards more “parvipes”-like characteristics of breeding birds throughout the mid-western Arctic. For a detailed overview of the occurrence of B. c. parvipes here in Ontario, please refer to Ken Abraham’s article:  http://www.ofo.ca/site/page/view/articles.cacklinggoose. 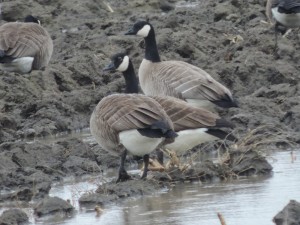 Figure 9: A photo of a probable Cackling Goose (at rear) that is not safely identifiable to subspecies. The “gentle”, elegant expression of this bird is a far cry from the typical blocky-headed, stocky hutchinsii Cackling Goose. Note the smooth transition from the base of the bill to its crown, which is rounded, or, “domed” in appearance. The rear of the crown lacks the peak that is often seen on hutchinsii cacklers; instead, what is seen is a smooth and rounded finish. I followed this bird through a variety of postures and this “look” was maintained throughout. Structurally, this bird looks quite similar to the birds in the photos from Queen Maud Gulf, Figure 10 (see below). Richmond, Ontario — April 2014.

Figure 10: Six Cackling Geese showcasing the drooping “Roman’s Nose” bill that is often seen with hutchinsii Cackling Geese but also with gently-sloped foreheads and smooth, dome-shaped crowns. The necks are ever so slightly thinner than avg hutchinsii, availing an elegant expression. Examine the size difference compared to the two interior Canada Geese (at front right). Are they cacklers? Where from?  Almonte Sewage Lagoons — 6 October 2014. 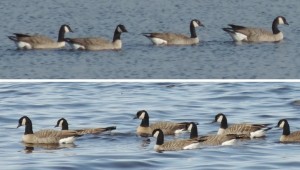 Figure 11: An example of the birds described above compared to “classic” hutchinsii. Careful examination of head shape, and overall GISS reveals these birds to be *quite clearly to my eyes* of two distinct populations. Are the top birds indicative of mid-western Arctic birds (where parvipes-like characteristics seem to originate) and the bottom, more-so eastern Arctic? Both are small-bodied white-cheeked geese. Cross-reference the birds in the upper shot above with the birds photographed from Queen Maud and Southampton Island below… 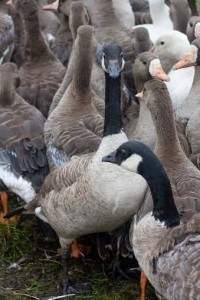 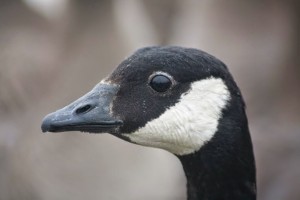 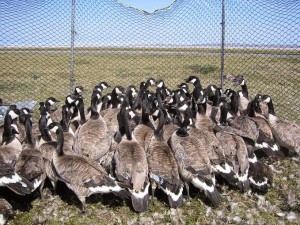 Many thanks to Ken Abraham and Jim Leafloor for allowing me to showcase these photographs on my site.

Question: How many “Richardson’s” Cackling Geese (hutchinsii) in each photo? Note: perhaps, in some photos, there are….none..   😉 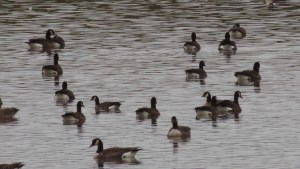 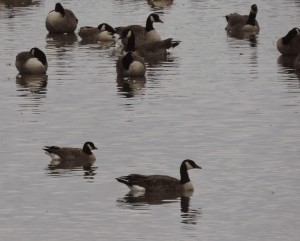 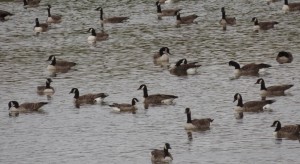 I visited the Almonte Sewage Lagoons today (28 September 2015). Canada Goose numbers were building from 1100 h (approx 600) to noon (approx 1800); dissipating from noon onwards. As I was leaving, another wave was arriving in small “bundles.” A pure flock of 22 Cackling (hutchinsii) flew overhead (from the WSW) and landed in the lagoons at 1137 h. I did three counts and tallied 21, 22, 22 respectively. At 1207, I noticed a “bundle” of 9 Cackling that I had previously overlooked. The bundle and the other 22 slowly began to coalesce and at 1224 hrs, all 31 flew SSE. eBird Checklist: http://ebird.org/ebird/canada/view/checklist?subID=S25217805 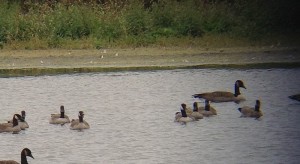 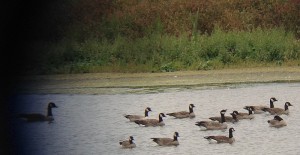 6 Cackling Geese and 3 Canada Geese. Note the two cacklers at left…they are juveniles (dusky wash throughout; dusky breast; some dusk in the cheek patch). I believe the bird at the center is also a juv.

4 Cackling with 3 Canada. The “blocky” head shape is really coming through on one of these cacklers; can you see it? Same 4/6 as above. 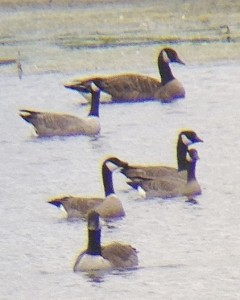 4 Cackling, 2 Canada. Same birds as above.

This short article offers some current, original identification insights but is for the most part a regurgitation of information shared with me over two study periods (Fall 2013 and 2014). Many thanks to Jim Leafloor and Steve Mlodinow for reviewing this article and thanks to Ken Abraham, Mark Gawn, and Ron Pittaway for their identification assistance and for sharing their information derived from field observations of Canada and Cackling Geese over many years of study.