As fall progresses and winter takes hold, top tier predators such as Great Horned Owls often switch hunting strategies in order to sustain themselves: they wander, often widely, in search of prey. This is especially true of birds in the north (i.e., in the boreal forest region).What this means for southern Ontario/Quebec birders is that birds quite distinct from the brownish-reddish local breeder (B. v. virginianus) can be seen. In Ontario, using B. v. virginianus as a starting point, a V-shaped cline toward paler, grayer, “colder” tones to the NW (B. v. subarcticus in prairie provinces and extreme NW Ontario & B. v. “scalariventris” throughout northern Ontario) and darker, blacker, “sootier” tones to the NE (B. v. heterocnemis in central Quebec, east to Newfoundland and Labrador) occurs. As ever, the boreal forest east of the Rockies presents limited geographic barriers, and, as such, clines (vs. crisp geographic delineation between subspecies) are more likely to be observed. What this also means is that some birds (perhaps many) that are prone to clinal variation are not truly safely assigned to subspecies level and identifications are best cushioned with a prefix such as “suggestive of” or “probable.” 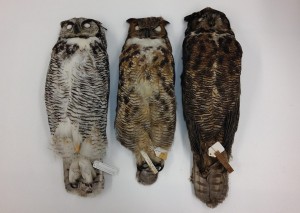 An FYI for Ottawa birders: that remarkable, pale Great Horned Owl to the left in the photo below was collected at Shirleys Bay in January 1975 by the late Richard Poulin. For more information on Great Horned Owls and an Ontario-based perspective on subspecies and geographic variation, please see Ron Pittaway and Jean Iron’s article: http://www.jeaniron.ca/Owls/2014/ghorned.htm