‘On’, as in, keep it in your binocular view. While standing along the edge of Greenland Rd. in Dunrobin, Ontario last spring (April 2015), I first spotted the bird in the pic as a distant spec. Troubleshooting began as some candidate hawk species were considered, with the initial lean ending with “female Cooper’s Hawk.”

However, something was a touch ‘off’ about the very distant Cooper’s and I kept the bird in view as it slowly but surely worked its way closer to where I was standing. The closer it got, the better it looked for something even “better” than Cooper’s. It neared closer still and banked, providing a clear view of its entire body shape. There was no doubt at this point….the bird was a goshawk! 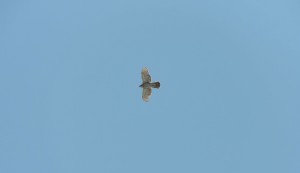 Photo: Note its head dwarfed by the width of its massive chest; and its long and broad tail fusing with its thick body. Also, the wings show a strong bulge at the secondaries and taper in width at the ‘hands’; a classic Northern Goshawk silhouette.