As the fall colours mature and the days begin to grow cold and weary, birders tend to lose the passion that once was for Passerines, and shift toward new birding horizons. As understandable a paradigm shift this may be, don’t give up on the Songbirds just yet, I say! We play a fun game over here at Eastern Ontario Birding, and this involves huntin’ for late warblers among flocks of Yellow-rumps and kinglets! By early-to-mid October, most of the other species of warbler (barring Palm, Nashville, Orange-crowned and, of course, Yellow-rumped) are uncommon to flat-out rare. Interestingly, as one example, a common August-September warbler such as Black-and-white becomes a rare find by mid-October (and one you should congratulate yourself on finding)! Yesterday, while birding at Presqu’ile Provincial Park, we observed a Cape May, a Black-and-white and a Magnolia; all of which are rare by the 12th of October. In Fall, there are sometimes “holding patterns” in the weather, with a consistent warm spell characterized by strong southerlies. These conditions “hold” migrants at staging sites along the N shore of Lake ON, in particular; but, this occurs pretty much everywhere where concentrations of warblers can be found. I believe birds will also migrate the wrong way during these warm spells! As a guide, I could feel in my gut that some lovely lingering warblers would be present if we searched carefully. My client Mark Giralt spotted the Black-and-white, which come to think of it, could very well be his rarest find (that I know of); a common bird becoming flat-out rare by the late season! To provide some perspective, and to also quantify the above writing, I have produced some eBird graphs detailing the number of individuals seen during the study period of 1990-2021. Enjoy! 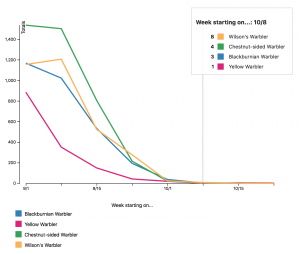 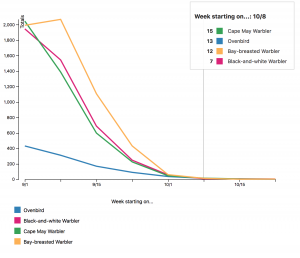 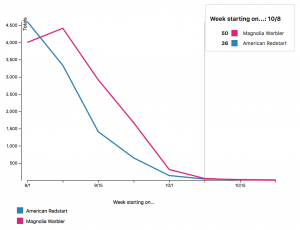 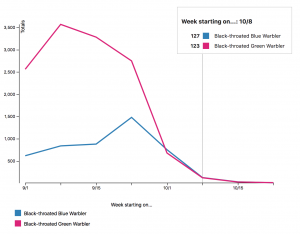