First winter birds skulk among large rafts of Common Goldeneyes and should be looked for as soon as Common’s begin to arrive in southern, but especially eastern, Ontario (roughly, late October). Typically on first winter birds, the feathers that make up the characteristic swept-back “mane” of Barrow’s are shorter, in some ways nullifying this go-to feature. Important to its ID here is the steep forehead and full, rounded head shape; even on this bird, the rear of the head is quite puffy, with some “mane” feathers jutting out. The bill is deep-based, with the lower edge gently curving to the tip, lending to a stout appearance at most distances. A lone bird is one thing, but note the picture in the comments of the Barrow’s with some Common’s: 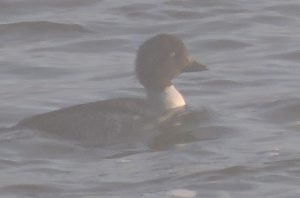 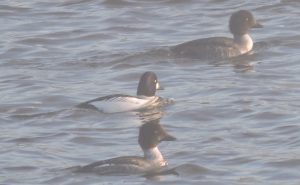