To keep myself sharp and field-ready during the two busiest birding seasons of the year, spring and fall, I visit a trail network in the west end of Ottawa called Shirleys Bay Waterfront Trail: NCC Greenbelt Trail 10. As a gym is to a weightlifter, NCC Greenbelt Trail 10 is to this birder; it is where I bird to strengthen and sharpen my birding skill set. It is also along these trails that I have seen and heard many beautiful things. For example, a cold front swept over eastern ON overnight from 26-27 August 2015. On 27 August, I was up at 3:00 AM, standing outside and listening to birds streaming overhead my house in Barrhaven. There I stood, smiling from ear to ear, enthralled in my own little world. Later that morning, I drove to the trail, arriving at approximately 5:30 AM and for the next 30 minutes, stood and watched as hundreds of warblers, Veeries and Rose-breasted Grosbeaks streamed past. The moon was taking its final bow of the night, as a warm glow arose from the horizon to the east. These birds were the last of the night-fliers, many of which subsequently provided examples of their nocturnal call notes from the trees nearby. By the time the sun rose, the hustle and bustle of a busy night were through, and silence had fallen over the forest.

To master the identification of Empidonax flycatchers, one must first have a solid grasp on the subtle differences in proportions, and subtle variations in colour between the species, and one must also train their eye to examine wing detail critically. The process of this challenging undertaking strains and trains one’s birding brain, prompting skill improvement. Field birding “muscle” (acuity) increases in response to repeated bouts of strain from managing “weight” (stress), and regularly scheduled birding “workouts” prompts improvement of one’s skill level. As an example, this past fall, for just over two weeks (from the third week of August to the end of the first week of September), I focused my attention on the field identification of Empidonax flycatchers. This focused study trained my eye to perceive and immediately classify minute details, but more importantly, it brought my birding sense to new heights. Birding sense in this case meaning, knowing when to rely on identifications based on detail, or identifications based on GISS (General Impression of Size and Shape). By the end of the second week of focused study, it seems to me that my mind had adapted to merging the two styles to form a “complete picture” in my search image. I was now prepared for what would be the most formidable of my self-imposed field challenges: the identification of fleeting views of little brown jobs…the sparrows. 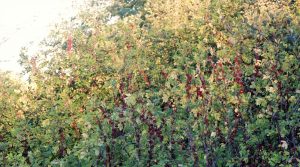 Photo: Somewhere in there, a Least Flycatcher is just waking up. At this location, the sun would slowly cast from one side to another, energizing all flying insects in its path. As the insects became active, so too did the flycatchers. One morning, at the crack of dawn, my dog wandered a bit too close to this, my favourite spot, and four Least Flycatchers stirred from cover, glancing right and glancing left; a bundle of Least’s! I stood with one hand on my camera….mouth ajar…frozen in a catatonic state of birding bliss.

On 12 September, while making my rounds along the trails at NCC Greenbelt Trail 10, I encountered a Clay-colored Sparrow eating seed with Chipping and White-throated Sparrows. I took a bunch of photos then went home and began to ponder about the migration of Spizella sparrows. I considered how Clay-colored seemed to “vanish” once they stopped singing, seemingly similar to that of Indigo Buntings. But, surely these birds were somewhere and surely they were, in some birding areas, commonly encountered during fall migration. But where? Turns out someplace near Stittsville, which I went on to name as the “Goulbourn Sparrow Field.” This sparrow field is a narrow hydro corridor filled with prime habitat (weedy veg’) and is a small enough strip of habitat to facilitate painstaking coverage! For the next two weeks, I relished the immense challenge of identifying sparrows deep in the tangles. A further skill-set was emerging; an immediate, sure sense for whether an ID should be accepted or let go. Letting ID’s go was an inevitable part of this particular birding journey; views were often short, and birds were sometimes just too deep in the tangles to be sure of their ID. My first few field sessions at the sparrow field left me hungry to improve my ID rate per birds seen, but this only slipped further and further downhill as more and more little brown bodies gathered and zipped about in the narrow corridor. This was, in fact, an excellent lesson, too. I was inherently honest with my effort, and I learned to stay relaxed and not force ID’s; it taught me to remain relaxed amidst a chaotic situation…quite literally, a firework spray of Spizella sparrows with every step! 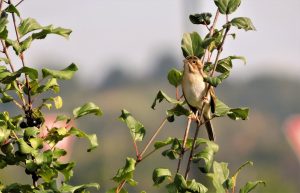 Photo: Occasionally, the rewards were great at the sparrow field. Take for example this fine, point-blank view of a Clay-colored Sparrow in basic (fall/winter) plumage. Basic birds often show the lovely buffy blush throughout the head and chest that this bird shows. A fall Clay-colored Sparrow is the utter epitome of “subtle beauty.”

Here I sit, in the dead of winter possessing dormant states of the skill-sets I worked so hard to achieve in the fall. I will stir them and energize them when the time is right, but for now, they sleep. Remember, it’s much more difficult to break through and achieve a higher level of skill then it is to re-gain Old Form after the off-season.  Treat yourself to some “birding boot camp” this year and enjoy your higher skill-set afterwards; undoubtedly, you will reap the many rewards long after the hard work is accomplished!