By late September, temperatures generally drop quite a bit overnight and do not rise again until mid to late morning. For early morning birding, look for edge habitat that is sunlit; these areas are warmer, drier, and usually have plenty of insect activity.

For example, this morning I walked through a damp, cool, mature woodlot in the west end of Ottawa. 4 species of bird only. As soon as I encountered sunlit edge habitat: 5 species of warbler (including Ovenbird), 3 species of vireo, and 3 species of sparrow within a 10 m radius! 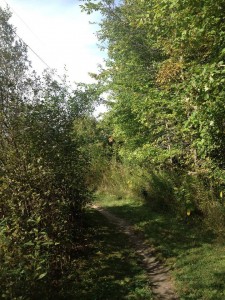 Photo: A sunlit edge along an NCC Trail in the west end of Ottawa. 21 September 2015.

The power of the pause (and silence) applies here: get in your speed-walking and talking where it’s quiet, and hit Stealth Mode around the edge!