Juvenile Northern Rough-winged Swallows provide an excellent example of subtle beauty. The throat, suffused with cinnamon; and the lesser, median, and greater coverts (wing bars), broadly-brushed with cinnamon. Each rounded edge of the tertials on the folded wing is bordered with cinnamon, as well. This colourful plumage is short-lived, however, and for most birds, wears/fades before they head south in the late summer. When to keep an eye out for this plumage in eastern Ontario: Anytime throughout June and early-to-mid July. 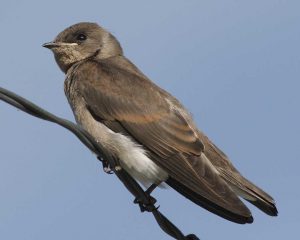